Deputy Peck is a character that appears in every episode. He is the second protagonist of the series. Peck is a woodpecker and deputy of Nice and Friendly Corners whose friends are Sheriff Callie and his cactus pal Toby. Sometimes Peck gets antsy when someone breaks the law or when he makes a mistake. Peck has a mule named Clementine who sometimes doesn't listen to Peck.

Deputy Peck is a red woodpecker with yellow eyes and beak, a brown hat with matching boots and a blue bandanna around his neck.

He first appeared in "Horseshoe Peck". He is the deputy of the Wild West. In Horseshoe Peck, he had a big ego and nobody wanted to play with him. 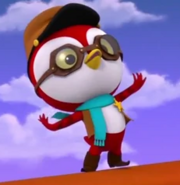